Not only B&B: a true holiday resort 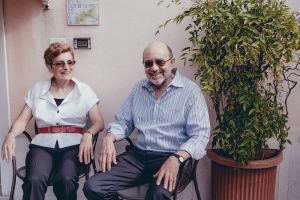 We are Giuseppina and Caesare and this is our holiday resort Il Giardino Alberato.
By clicking on the photos below, you can explore the 4 structure we offer to our guests.
All overlook the internal garden.

For any information application, do not hesitate to contact us, we are to yours complete disposition.
Welcome!

In the kitchen where we prepare breakfast for the guests of the B & B there are three chairs and a sideboard that tell a little about the history of our family. The chairs, which date back to the late nineteenth century, are signed G. G., that is Giorgio Ghedini, Cesare’s great-grandfather. A “R” was also added to a chair, which stands for Caesar’s grandfather.

As Giuseppina and Cesare always say: the cupboard was married before us!!!